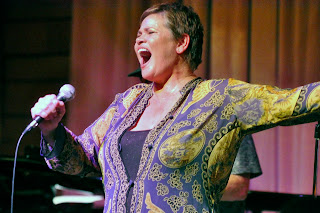 Oh February, February, you fickle bitch you.  Teasing us with the promise of spring – love seeing those crocuses coming up and even a few zings of sunshine – and then whomping our butts with SNOW and COLD as we’re about ready to dive into March!  Yep, we had a few inches of snow, icy winds and temperatures down the in the teens at night.  UGH, my power bill is going to be out of control yet again this month.  The snow is beautiful…but no thanks so late in winter.
So how do you banish the blahs?  You get out of the house and downtown for a change of scenery and some down & dirty live blues!

Exhibit A:  the Highway 99 Blues Bar in Seattle.  Gotta hand it to my friends D & B who invite a group of us out several times a year for different kinds of live music and dancing.  A couple months ago it was live disco – now, the Blues!  And I’m a suburban girl who needs to get my city fix on more and more, plus I LOVE checking out new venues.  Great friends, great music and a big ol’ dance floor – sounds good to me!

So ironically a few hours before hearing the Blues, I got smacked with the Blues myself.  Totally came out of nowhere.

Let me back up here a little.  And come with me on this tangent. I’d invited G to come along with me to this a few weeks ago, even before he left on his trip to Australia.  And I was sooo excited he said yes.  This was going to be the first time introducing him to a few of my friends and I was so over the top giddy!  Weeee!

But the reality is he came down with a really bad bug a few days after coming back home.  And who wouldn’t after flying in a tube with hundreds of people halfway around the planet sharing god knows what icky germs for hours and hours, plus the shock of weather change from Australian summer to our freakazoidal cold snap here right?  Yuck. We jokingly called it the Australian Wallaby Flu.

So he laid low for a few days and I had a couple of girls nights out earlier in the week, just keeping myself busy meanwhile.  By Friday I was missing him so bad!  And he came by to take me to dinner.  We thought a margarita at the Mexican place walking distance from my house would kill off the germs but no dice.  He was still hacking away.  But you know I was so happy to see him, it didn’t matter that by 8pm he was pretty much toast.  Dang, this was a bad bug already, not leftover jeg lag!  And ahhh, kisses and walking back home.  I took his arm as we walked.  You know, I really love that feeling.  Nice and strong.  A little stargazing too – LOVE that.

Now it’s Saturday, and he’s still feeling like crap.  And he calls me and says he’s really sorry but he’s gonna have to bail on going out to the club with me.

Oh no oh no oh no. My heart sank.  And I mentally started to topple over into a shitty thought place I’d thought I’d left behind over a decade ago. Being flaked out on.  Being let down at the last minute.  Guys who say they’ll be there for me and change on a dime with no rational reason and don’t show up.  Fuck!

But screechy record sound already.  The dude is sick!  He doesn’t flake out on me!!  And it’s not 2000 or 2001!!  And oh dear lord this mental yin and yang was gonging in my head and I choked up. The rational vs. the emotional.  My voice wobbled on the phone I’m sure.  I don’t recall all of what I said but I told him I felt totally bummed and now didn’t feel like going either.

Meanwhile, the Bling.  Yes, I got this call about a half hour before I was expecting some girlfriends (and my Mom!) at my house for an informal jewelry show and open house. Had my dining table decked out in beautiful scarves (nice alternative to a tablecloth) and trays of gorgeous jewelry ready to be touched and tried on.  A little wine, sparkling water and some munchies.  Weee!  And now I’m feeling like a deflated balloon.  But I gotta dig deep, shake it off and be the happy Hostess here!

And I did and was.  We had a wonderful afternoon – this was a mix of friends who had not yet met eachother, nor had anyone met my Mom yet either!  We had a great time.  And you know, girl talk helps too.  B (of D & B) came by too and when I told her G couldn’t make it after all she was all oh man that’s too bad, but next time.  Just hearing those words made me realize that my old residue feelings from many, many years ago, have no place here.  It’s the PAST. No room!  It has nothing to do with G and me. And my feelings, while, yes, they are my feelings, aren’t the point here.  Meaning, G is sick, end of story.  He’ll be back to normal in a day or two.

HUHHHHHHH.  So that was my mental workout and I was glad to have friends with me, B’s keepin’ it real advice, and time to sell a little bling.  In fact, the party sales put me past the goal I’d set for myself when I started this side business!!  Woo hooooooo!

Then, it was time for the Blues.  G called while I was just about at the club and it was so good to hear his voice.  I was feeling a lot better about everything and even about ready to laugh at myself for how I’d reacted earlier.  And when I was still not sure exactly where this club was, he looked it up on his laptop and helped me find it over the phone.  Which was awesome, by the way.

I met up with D, B and a couple other couples (wow, good thing they got there early and got a table – the place was packed!).  LOVED the music.  There were two bands that night – first was the Karen Lovely band (she’s in the pic up top).  If Janis Joplin had a niece, this woman would be her.  Freaking killer pipes.  I was totally blown away – she far outshone the second act.

Then, I suddenly felt tired.  And feverish. And then chills and my throat was sore. What was going on here? Did I catch something from G? Or was it the combo of a fun, sweaty basement bar and talking loudly, combined with a pulled pork sandwich and a couple of Stellas?

Nope.  I was coming down with a cold.  Who knows where it came from.  But how ironic.  B even said she’s been battling one over a week now.  Yes, it’s February alright.

As we left the bar later and walked back to our cars, the cold air blasted right into my lungs.  Cold, icy wind off the water.  When I got to my car, I looked up and smiled.  For I’d parked just steps from the steam plant where my Dad was CEO for many years before he retired.  Something about seeing that building that literally put food on the table for my family and so much more, where Dad invested years in his career and turned the company from a bump on a log to a thriving operation made me do a big mental full circle.  The plant chugs along 24/7 as it has for over 100 years.  My past.  And my emotional loopy doop was the last gasp (let’s hope please!) of an old head rhythm whose tune is long past its prime.

2 thoughts on “The Blahs, the Blues and the Bling”