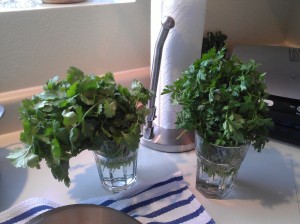 Woweee….here we are in September already!  And it’s a long Labor Day weekend, which is turning out un-laborious for me with a change in plans.  L and I were going to get back at the popcorn ceiling removal project here in the townhouse, but he’s landed some new business and needed to do some work before heading out of town later this week.  I reminded him how *happy* I will be when we are finished and that we’d made a goal to finish in September, hint hint.  September is pretty decent weather-wise, but October and onward is a crap shoot downhill.  Meaning, this ceiling scraping work (and the priming and painting we still need to do) requires you to keep the windows open for ventilation and in rainy weather that’s not a good idea.  And I’d really, really like my tub back; it’s full of pillows and knick knacks from the bedrooms as I’ve had an ongoing shell game upstairs here moving stuff out of the way depending on where we’re working.  I do have a separate shower in another bathroom, but I’m craving a good soak in the tub.

Oh and what was the deal with the water leaking under my sink from last week?  My plumber, R, came by on Friday (whew, he wasn’t out of town!) and turns out I just need a new garbage disposal!  A small hole had rusted through it on the far side.  He’s going to replace it for me later this week – what a relief to know what the problem is, and that it’s not a major repair job!  I REALLY let that drag me down once I discovered that moldy puddle of water under my sink the other night, ugh.  I know I shouldn’t be so hard on myself, but that’s the DNA hard at work.

I had a major, major seafood craving yesterday – guess it’s been awhile since I’ve grabbed sushi for lunch or sautéed a little shrimp for my pasta at dinner.  And I thought, why not CEVICHE?  I haven’t made it in ages, and it will be a fun, cross-hemisphere toast to my friends P and B who are enjoying a fabulous Bucket List adventure visiting Ecuador, the Galapagos Islands and later into Peru to see Macchu Picchu!  Follow along with incredible stories and pictures here!

So whether you spell it cebiche, seviche or ceviche, it’s a relatively easy and SUPER flavorful, healthy dish!  The only catch is to allow a few hours for marinating in your fridge. You can prepare it as an hors d’oeuvre or first course or enjoy it as a main course.  Say it with me now….”seh VEE chay.”  [Note that entradas, or first courses, are essential in authentic South American cooking.]

Ceviche is fish or seafood “cooked” by citrus juice.  Lemon, lime and orange juices are most typically used, but more recently passion fruit and tamarillos are sometimes used as the base for the marinade.  Maria Baez Kijac, author of The South American Table describes it this way:

“Cebiches can be made with just about any type of seafood – fish, shrimp, scallops, clams, mussels, squid, langostinos or lobster.  They can also be made with chicken, duck, mushrooms, hearts of palm, lupini beans, avocados, broccoli and so on.  The common demoninator among the countries that prepare them is the lemon and lime juices used as the basis for the marinade.  The fish is ‘cooked’ by the acid in the marinade.  Depending on the type of fish and the thickness of the pieces, this ‘cooking’ takes anywhere from three to six hours, until the fish is opaque.  Shellfish is usually cooked or blanched first before adding it to the marinade.”

Kijac’s cookbook contains SIXTEEN different ceviche recipes – this is heavenly reading for sure!  I chose a shellfish recipe – Cebiche Mixto.  As Kijac explains, “this is classic cebiche from the coast of Ecuador and has become a favorite of the highlands as well.  It can be made with fish (cebiche de pescado), just shrimp (cebiche de camarones), or any mixture of shellfish (cebiche mixto).  It is wonderfully refreshing and light, ideal for the hot-weather months.  This type of cebiche is served with a variety of side dishes, such as tostado (toasted dried corn), popcorn, chifles (green plantain chips), and sometimes French bread.”

“Cebiche Mixto usually contains shrimp, assorted shellfish and sometimes fish.  If you order cebiche mixto in a restaurant, expect to get squid and octopus in the dish.”

In a large saucepan, bring the water and scallion to a boil, reduce heat to medium and simmer for 5 minutes.  Add the shrimp, remove from heat and let stand for a few seconds until the shrimp turn pink.  Remove with a slotted spoon (reserving the cooking liquid) and rinse under cold running water (rinsing will prevent the shrimp from becoming rubbery).

To the cooking liquid in the saucepan, add the scallops.  Bring back to a boil, remove from heat, cover and let stand for 3 minutes depending on the size of the scallops.  Cut a scallop in half to see if it is cooked through (it should be milky white in the center).  If so, drain and rinse under cold running water.

Place the wine, mussels and clams (if using) in a large skillet and bring to a boil over high heat.  Cover and let continue to boil until the shells are open, 3 to 5 minutes.  Discard any clams or mussels that do not open.  Remove the clams and mussels from their shells and discard the shells.

To make the marinade, combine all the ingredients in a large glass bowl.  Stir in the shrimp, scallops, mussels and clams.  Mix well, cover with plastic wrap and refrigerate for at least two hours.

Right before serving, taste for salt, sugar and hot pepper sauce.  Serve in small glass bowls or stemmed glasses, each garnished in the center with 1 tsp each chopped tomato, bell pepper, onion, cilantro and parsley.  Serve with the side dishes.

Fivenineteen notes:  I purchased pre-cooked shrimp, but I still went through the motions of adding it to the cooking liquid; I just didn’t let it sit too long given it was already cooked.  It turned out great – the shrimp were flavorful, tender and not too tough.  I substituted a red bell pepper for a green one (green bell peppers are not my thing).  For the tomato, I chose an organic heirloom tomato and did not peel it. I used a small, yellow sweet onion.  I also prefer the flat, Italian leaf parsley rather than the curly style.

Side dish?  I had a small bag of Basmati rice staring at me on the kitchen counter and served it with that instead.  That’s not authentic, but practicality won out.  I put the leftover cilantro and parsley in glasses with a little water to see if they will last a little longer this way, rather than in the ventilated Tupperware in the fridge.

The colors and flavors of this recipe are fantastic – and I can’t WAIT to savor the leftovers tonight!