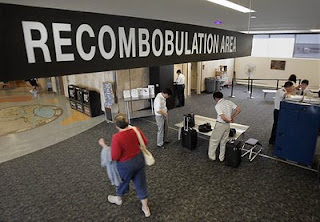 “Well, at least you’ve still got your humor.”

I’ve quipped this a few times and it came up again yesterday when I was taking a (very rare) long lunch with a co-worker.  Our group moved to a different building a few weeks ago, and it’s been a very nice change of scenery.  And a much lighter and brighter building.  Plus there’s a Mexican restaurant very close by.  We toasted to the end of a rough week.  As much as a margarita was very, very tempting, I stuck with plain iced tea.  Going back to work after having a drink makes me incredibly bloated and sleepy.  Probably not a good mode to be in when you need to crank out a few reports.

I made up for it when I met a couple great friends for happy hour that evening.

Anyway, I think I do have a good knack for eeking out humor, no matter how shitty the situtation is.  But it definitely can take a little time to surface.

Guys, if you’re going to dump me, don’t do it on the brink of Daylight Savings Time.  Howzat?  Holy crap I have been through the emotional and physical wringer.  I’ve been sick since late February-ish.  And I still can’t quite shake this cough.  My lung power’s thrashed.  It really shows when I play hockey and it’s cut into my gym time.  I’ve got some 5Ks to train for this year, people!

DST’s only an hour jump forward, but it might as well be 8.  UGH.  I’m a terrible morning person and it really takes a good week or two for me to adjust.  Combine that with my health and emotions very out of wack and I’ve been sleeping.  A lot.  Call it cliche, but sleep IS the best medicine.  I’ve taken a couple sick days from work (very, very rare for me) and after letting people know I’ll be out I would go back to bed and sleep.  Until 1pm or so.

And I was just minutes “post-dumped” when the earthquake and tsunami in Japan popped onto the news.  Holy moly, the quake’s now upgraded to a 9.0.  I hope I never, ever have to experience the horror.  I was extremely worried about my parents who were in Hawaii and had to evacuate that Thursday evening.  And sleep in their car on higher ground near a school.  My folks have had some sort of drama nearly every year they’ve gone to Hawaii on vacation.  Their cat died one year.  We had flooding here at home another year and were worried their house would be damaged.  Last year it was the tsunami evacuations following the earthquake in Chile.  This year…well my Mom THOUGHT that finding a mouse in their condo kitchen on their first night was going to be the drama this year.  Turns out it sure wasn’t.

So…recombobulating.  The word makes a lot of sense – and makes me giggle too.  I wrote it down randomly a few nights ago on a piece of paper here and I thought, yep, that’s what I’m going to do – and write about this week.

This blog’s been a real mishmash of topics.  Hence why I almost called it Random Crap when I was first getting it underway.  I took a risk blogging about my dating episode earlier this year, for I’d kindasorta made a mini sort of vow to myself that I wouldn’t ever blog on my dating life.  Do I regret doing so?  Nope.  It was a very fun and powerful (and brief turns out) interlude in my life and now it’s documented.

How am I recombobulating?  Well, how delicious that we’re on the brink of Spring.  The Vernal Equinox is tomorrow and THAT’S new beginnings and changes.  For real and huge.  So the tick-tock of time marching forward resonates deep in me and will naturally realign and readjust my being and soul.

I’m also thinking about what I want to write on and focus on (outside of work) in these upcoming months.  I’ve got a very beautiful and growing sterling silver jewelry inventory given my Silpada side business.  Business itself has been a tad slow, but my team members say that January and February typically are slow.   Gotta love a side job where you can WEAR your inventory with passion.  If I could sell this jewelry full-time and make a good living I’d do it in a heartbeat.  I’ve been feeling tiny tugs and pulls inside me that my job – while I’m grateful to HAVE one – isn’t feeding my soul.  I have cravings for more creative work and things fashion/beauty focused.  And writing.  I’ve been doing – loosely – the same type of work professionally for over a decade.  I’m pretty good at it and continually keep my mind open to learn, but I feel it’s time for a career change.  But that’s going to require a lot more brainstorming, and likely finding a good coach/mentor.

I’m also going to blow the dust off my slow cooker and do some Cuban style chicken tonight.  Then tomorrow whip up a batch of bolognese sauce – in the slow cooker – and try it with polenta.  I have one of the Williams-Sonoma Slow Cooker recipe books and everything looks incredible.

So stay tuned for more.  More of what I don’t know.  But that’s the fun of blogging…while I recombobulate.