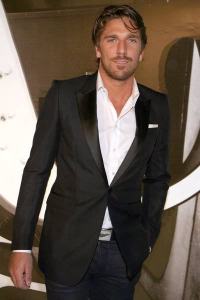 We’re all about Beefcake today. Hot hockey players to be exact. I think that old saying “idle hands are the Devil’s workshop” might even be appropriate to throw in here too as an aside.

Yeah, I know, this is a departure from my typical postings. And I should probably apologize in advance to my straight, male readers for I’m not trying to alienate you in any way whatsoever. But please, feel free to keep reading. I promise I won’t tell anyone.

I’ve been a part of a wonderful online forum for over three years where the chitter chatter is mostly about handbags (see my “Hockey and Handbags, Part 2” post for more on that). You might think this would fly in the face of my goal to be more frugal, but honestly I am very content with my bag collection and I don’t need any right now. I might even sell off a couple to get some extra cash. I’ve met quite a few other forum members in real life (those here in the local area) for lunch and shopping several times. It’s just a fabulous community both online and in person.

Now, within that forum is a subforum that’s all about Hockey. I know, it sounds like a weird thing to have a section about hockey on a handbag forum but we’re a delicious, unique slice of the Universe…I dare anyone to find as rare a pairing of two passionate and disparate interests as these within one website.

We chat about our love of the game, our favorite teams, playoffs, who’s injured, who’s rocking the house, stats and standings – just about anything you can imagine. We’re into it so much we had to start up a separate subforum just dedicated to the upcoming Olympics!

So just a few days ago something extra funny happened. I posted something about Alex Burrows (he’s a Center with the Vancouver Canucks) and how he had Hat Tricks two games in a row (that’s 3 goals scored in a game to translate). I added a picture of him to my post and wrote, with tongue firmly planted in cheek, “Hey, ladies [meaning, Burrows speaking here], I got hat tricks two games in a row…anyone up for a little shinny?”

Side note: Shinny is a term for pick up hockey.

After that, the posts started snowballing. We started adding names of other cute hockey players to this shinny lineup. There are women in this forum from all over the country, so no NHL team was forgotten…at least not within our perspective. We kept the roster focused mostly to current NHL’ers but you’ll see later that we made a few exceptions too.

Sigh…in my search for more Hockey hotness I admit I hit a low point. Yes, sadly, oh so sadly, I actually googled “hot hockey players.” And even sadder that I got a ton of search results! Most of these are Puckbunny sites…girls who are so obsessed with players some of them probably think they could actually marry one of these guys someday. Ummmm…yeah OK. That’s not my thing at all and honestly I didn’t agree with a lot of their picks either! Onward.

We put this lineup together in just about 2-3 days. If only other virtual teams I’ve worked with could collaborate so well!

And in addition to this fine lineup we created I felt it was only fitting to have a letter addressed to these fine gents. So…here goes:

An open letter to the Gentlemen of the Hot Shinny Roster

To be a part of this uber special team, all that matters is if you’re HOT. And, currently playing in the NHL, but we took some liberty with a few of you because, well, dangit, it’s OUR rules and we can break ’em any time we want. That’s how we roll. We call the shots.

How do we define hot? Drool-worthy, melt any ice you set your skates upon, set our pants a-fire, make us think dirty thoughts of what we’d like to do to you or you to us kinds of hot. Smoke from our computer monitor, screen lickable hotness. It’s OK to rip our clothes off with your teeth and slam us up against a wall kinds of hot. You get the idea.

Here are a few more details. Pay attention.
– We know you have stats but it doesn’t matter. We don’t give a rat’s arse about your +/- or PIMs. If you’re hot, you’re still in.
– Netminders, we couldn’t care less about your GAA or SV PCT.
– Doesn’t matter how many Stanley Cups you’ve hoisted (or not)
– Doesn’t matter where you’re from or where you play/have played
– Doesn’t matter how many Conn Smythe trophies you’ve won or been nominated for (or not).
– We know some of you are married and some of you are single. We don’t care either way. Heck, some of us who picked you are married and some of us are single. One thing’s for sure…we’re not dead.
– Have you won an Olympic medal or two? None? We don’t care.
– Doesn’t matter which position you play, although we have taken the utmost of care to ensure a proportional lineup. How? We actually know a thing or two about the game. Yep, that’s right. And we have a resident expert amongst us for All Things Hockey. We call her The Commish.

And to counterbalance the Retired Hotness of Mr. Lemieux and Mr. Sakic we felt it necessary to bring in Junior Hotness in Training, e.g. Mr. Duchene. But given the age group of those of us who picked you we put him in Junior Training status. Because let’s face it, the guy’s only been able to drive for a couple years. And none of us here is named Mary Kay Letourneau. And…none of us wants to serve jail time either.

Oooh and a quick PS: That’s Henrik Lundqvist in the picture…Goalie for the New York Rangers. A fine Swedish export if there ever was.

Is it warm in here?