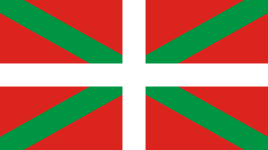 Wow.  Just WOW.  I recently discovered an absolute jewel of a French store with cooking classes in the wonderfully eclectic Seattle neighborhood of Capitol Hill, just east of downtown.

It’s Paris Eastside.  What a treasure this place is!  Everything inside is from France or is authentic to the French lifestyle.  The owner, Muriel, is a delightfully charming French woman who will welcome you like family when you arrive. After years teaching French cooking to English speaking tourists in Paris, she moved to Bellevue, Washington where she lives with her family…and has recreated the cooking school experience she taught in France now in Seattle!

Yesterday’s class was authentic Basque cooking.  The Basque region consists of two autonomous communities – one in northern Spain and the other in southern France just adjacent to it.  If you haven’t heard of this region or its unique peoples, language and culture I highly recommend taking a closer look.  [And never, ever call a Basque person Spanish as an aside!]  Yikes.  Although you will certainly notice both Spanish and French influences in the food and lifestyle.

Not only was the class ambience amazing with wonderful people (we were a small, intimate group of just 7 of us cooking with Muriel), but we also had a gloriously sunny, late summer day outside without a cloud in the sky, along with those long shadows and a slightly crispy feeling in the air letting you know Fall is mere days away.  So the shop doors stayed open as we cooked, letting the sunshine and fresh air pour in.  That plus the busy sounds of the city (cars, people talking and passing) and it was just magical.  Being in an intimate oasis mere steps from the hustle and bustle outside. 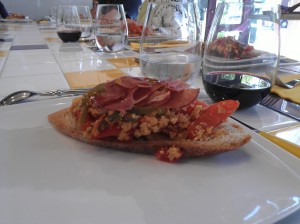 We made 3 recipes – Piperade basque, a pepper dish which is like a very elegant egg scramble (although light on the proportion of eggs as you can see), served on a sliced baguette and topped with a little prosciutto.  Doesn’t that look wonderful?  Mmmm hmmm.

We also made Axoa (that’s “uh CHO uh”), a meat dish with cubed veal, peppers and ground Espelette pepper.  Sure, you could substitute another type of ground chili pepper, but it won’t have the unique flavor that this one does.  Ground Espelette pepper is fairly mild with a distinctive, warm tomato-y aroma and taste.  Nice to enhance the flavors of the dish, without being overwhelming or too hot and spicy.

Now, veal is a little hard to come by and for many it’s a hot-button, shunned food for lots of reasons.  So, we made a separate batch with cubed chicken as well, and each person in the class got to choose whether they wanted to try theirs with the veal or with the chicken.  I chose both to compare.  I haven’t eaten veal since I was a kid so I had forgotten it has such a nice, rich flavor, but I went for it…after all, “when in Rome,” right?.  And I gotta say, the veal version far outshined the chicken!

We started making the dessert first (Gâteau Basque – Basque cake), given it was the most time-intensive to prepare and needed 45 minutes to fully cook.  Oh yeah, that’s one dense cake alright!  With a wonderful crème filling of eggs, sugar, flour, vanilla…oh yeah we’re not here to skimp on the best ingredients or on calories here, people!  This is a rich dessert, so just a small wedge is all you need with a side of cherry jam.

A shared bottle of wine and relaxed conversation wrapped up our cooking experience.  Definitely going back again for sure!  Afterwards we headed down to Olympic Sculpture Park on the Seattle waterfront.  The sunshine was endless and sparkled on the water…watching the ferry boats going back and forth to Bainbridge Island, and the enormous cruise ships on their way up to Alaska.  Mount Rainier out clear as a bell, and lots of interesting and fascinating outdoor sculptures in the park.  When you truly relax and open your mind and drink in all the pleasures and scenery around you, you feel ALIVE.  At peace.  Balanced. And in the present.  How wonderful to have this park just steps from downtown!

By the time dinner rolled around lighter fare was in order.  Grilled salmon and sliced, grilled white eggplant (a first for me to try!) was just perfect.  And why not cap off the night with a trip to the Royal Room in Seattle’s Columbia City neighborhood for some live jazz and a nightcap?