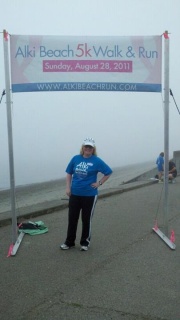 Whew!  The 3rd time IS a charm.  After being too tired or too rained out for two other 5Ks this spring/summer, I finally got one under my belt this year!

OK, yeah…I didn’t RUN it, but it still counts right?

This was my second time volunteering in the annual Alki Beach 5K Walk & Run, which benefits Northwest Hope and Healing.  Northwest Hope and Healing is a non-profit organization which provides emergency financial assistance for women who are undergoing breast cancer treatment at Swedish Medical Center in Seattle.  Assistance with basic living expenses like rent, childcare and groceries.

And wow that was a lot of hyperlinking in that last paragraph.  But really good stuff – please check it out.

So, how do you volunteer at a 5K?  Well, the way I did today was one of the easiest jobs ever – walk the course at the very end, to help let the police and others know that they could start re-opening the roads again.  That’s it!

There are a ton of both new and old memories woven into this event…starting with the neighborhood.  Alki Beach is in West Seattle, and there’s a ton of family history here on my Dad’s side of the family.  My grandfather grew up in West Seattle in the 1920s.  He and my grandmother later raised my Dad and Uncle in this same neighborhood.  I have enormously fond memories as a kid of the long drive from my house growing up in the suburbs over to West Seattle for Sunday dinner at Grandma and Grandpa’s house. Countless, joyful times.

And the newer memories are from my dear friend P, who inspired me to start training to run 5Ks a couple of years ago.  She and I used to work together and I’m so glad we still keep in touch despite super busy schedules.  P’s both run and volunteered in this 5K before, and I was so happy she asked me to join her again this year.

What can I say…this just FEELS good all around.  And it’s a nice change of pace getting out of the suburbs and into a wonderful, older neighborhood in the city, right on the salt water of Puget Sound.

OK, getting up super early on a Sunday morning is not my favorite thing to do, but once I got up, got dressed and on my way to meet P for our carpool, I was smiling.  P showed up with S, an exchange student from Japan who is staying with a friend of P’s while attending college here.  S was a good sport – I wasn’t sure if she knew entirely what this event was going to be all about but I admired her spunk and enthusiasm.  And her English was pretty good too!  Far better than my Japanese for sure, ha.

We arrived at Alki Beach around 8am.  Damn, that fog was thick but thankfully it was not as chilly as it was last year.  I remember borrowing knit running gloves from P at the last minute!  And also having to put our t-shirts on over our jackets! This year it was not cold, but that fog didn’t burn of AT ALL.

Yep, that’s Yours Truly in this week’s picture – that’s a fivenineteen first, everyone.  Had it not been so foggy there would have been a spectacular view of the Seattle skyline behind me.  Believe me.  P and I were so bummed because we really wanted S (the exchange student) to experience the view.  But the darn fog never burned off.

The one challenging thing about walking at the tail end of a 5K is, well, keeping your pace just right.  You don’t want to ‘hover’ too close behind the last group of walkers.  And, you want to make sure you start walking truly after everyone else has started.  With about 1200 people participating we had to wait several minutes before we could take to the street and start.

This race goes up and down Alki Avenue – a very flat, fast course.  At the halfway point the course does a 180 turn and heads back down the street, finishing at the same place we started.  Even though I was walking at a very slow pace with P and S, I was looking forward to a quick gulp of water at the water stop.  NOPE.  No water stop at the turn around point this year!  If I had been running this race I would have been extremely pissed.  Yikes.

Other than a few late stragglers we had to corral (how in the hell do you show up over one hour late for a 5K? Baffling.) the three of us had a very nice, relaxing stroll.  And we even finished in around 1 hour 15 minutes.  MUCH faster than last year.  Feels kinda cool walking over the finishing line and hearing the emcee announce, “…and our last walkers have just crossed the finish line…”.  Meanwhile we didn’t even break a sweat.

So although the fog kept its iron-clad grip on the neighborhood (hence my ‘cotton ball’ post title today), we had a wonderful morning volunteering.

And on the drive back to the suburbs?  Glorious sunshine.  Even Mount Baker was out.  Too funny how socked in Alki was.

Now it’s time for a nap.  Until next week, everyone!