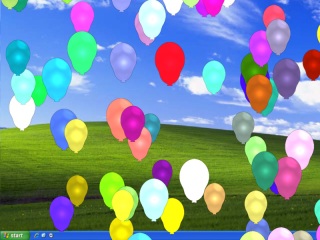 Do I exaggerate just a tad here?  Perhaps.  But I like the title so it stays.

I work in a technology field where we’re diving head first and full-speed into something new.  This is exhilarating one minute and panicky the next – and everywhere in between on the spectrum. There are moments I feel like doing happy backflips out of my desk chair and times I feel like punting people to the Moon.  And it’s all good; it’s just the ‘normal’ most all of us are used to, as crazy as it sounds.  Maybe it’s like living somewhere with rapidly-changing weather.  Storms are guaranteed, but so is sunshine.

My prior job a couple gigs back needs a nod and thanks.  It lasted just 11 months (by design) but it probably was one of the best, more recent ones which continued thickening up that professional skin of mine to weather my new flavor of storms.

And it also helps I used to work on this current company’s campus from 1999 to 2006, so I have a ton of backstory and understanding of the overall culture, which really hasn’t changed much even though the technology products certainly have.  Yes, I worked at this company starting right on the brink of Y2K.  And all those unknowns which now seem laughable and quaint – munching on Olive Garden lasagne late into the evening with a chaser of sparkling cider…with everyone waiting for the big 999 to 000 calendar rollover.

Where I’m based now is thick and bloated with memories.  It’s the original group of buildings dating back to the early 1980s – a time when their location was considered The Sticks and these buildings were probably in the sticks of those sticks.  Heavy, solid hardwood office and conference room doors.  Worn, dated, threadbare carpet.  Walls banged up from countless furniture moves. Old school architecture.  How many now-billionaires used to walk these older buildings’ halls or strolled the asphalt paths and sky bridges between them?

I walked a few of those hallowed outdoor paths with a peer of my manager yesterday afternoon during a break.  More of a not-quite-locking-horns discussion with intent to get things back on track.  Did we argue?  Yes, perhaps.  With a beautiful large fountain as background noise.  And I was so focused on our conversation I barely noticed if others were passing by and honestly didn’t really care.

I have to stop myself here too.  Wasn’t it me just a few months ago so hungry to get back to work?  And now that it’s been about five months I’m back to venting about my job?  I have to laugh at myself.  I suppose we’re only human.

Gotta love entanglement.  That’s the gem of a term a sales VP I worked with would use to demonstrate how various engagements can ‘entangle’ one or many to where they are seemingly indispensable resources (which, in turn, means repeat business).  But that’s a slippery, double-edged sword.

My workload is now split three ways – each ‘way’ reports up to 3 different people in my immediate organization…my official manager, a peer of my manager, and their manager (my skip-level).  How do these tangled webs get woven so quickly?  And is this normal or is it just my possibly weird work style which brings this on?  I’ve been scratching my head about this for years for it seems to be a pattern.  Whether it’s a strength or not I don’t know.

As you might expect, this is a recipe prone for collisions.  Collisions I am used to navigating through with level-headed charm and hopefully a touch of grace and tact.  But be warned – the occasional F bomb creeps in.  Most people I work with know this.  More often than not, my style is ‘court jester’.  Keep focused and work hard but take a moment for a laugh or a friendly rib-jabbing.

It all boiled over recently about bunch of fucking balloons.  Part of our organization had an all-day event planned and somehow balloons seemed to creep themselves in as must-have decorations for the large campus conference room we had booked.  Nothing wrong with that, but in the end decor was not a priority.  This was an internal event – no outside press invited.

I’d been head down getting an overdue report scrubbed and delivered on Thursday – a new report of which the overall strategy is still fuzzy to me but it was repeatedly explained to me it was urgent so I forged ahead.  The peer of my manager  stopped by and asked me to call a party shop to confirm if they took a certain credit card for the balloon order.  I’m sure the look on my face said it all.  Are you freaking kidding me?? I was head-down finishing another past-due deliverable, far more important than balloons, and now I’m being asked to drop everything and order balloons?  I’m glad a co-worker of mine was witness to this whole conversation (I share an office with two other women), for I pretty much recoiled and said um NO.  Find our team’s administrative assistant for help with crap like that.  Come ON. I was tired of getting randomized about things that were far less urgent than past due reports.

I don’t like playing the tattletale role but I had to share what was going on with my immediate manager.  So, we had an impromptu, private chitchat.  The look on his face was priceless.  He in turn went to speak with his manager about it and I can only imagine what happened from there.

I was tired.  I’m a terrible morning person and had an early meeting that morning and knew the morning of the all-day event would be an even earlier start.

So that Friday morning I arrived at the large conference room – more for moral support than actual contributions.  I arrived a good hour before I usually come to work so I was still in a fog. The presentation team was putting the final touches on the PowerPoint deck and I could see it all on the large projection screen.  These are people I work with on a daily basis and I have huge respect for their knowledge.  And great personalities too.

Now. I simply cannot STAND making final teensy tweaks right before a presentation.  Everything should be scrubbed, proofread, previewed and rehearsed far prior, but obviously that’s an ideal, not always reality.  But I won’t kid you – that final tweaky behavior drives me absolutely batshit crazy.  I’ve seen it happen too many times – people freaking out over minutiae that in the end will be a split second blip viewing of a slide never to be seen again.  I’ve been on other project teams where laptops are mingling at the hotel restaurant tables with breakfast before we whiz off to a client presentation – in a town we’re not familiar with and we’re still figuring out where we’re supposed to go and how bad the traffic will be.  Or where a fellow team member is sitting on the floor of a crowded airport terminal with his laptop, trying to finish up something over the phone while the rest of the plane is boarding.  I love an occasional adrenaline rush, but that is WAY too over the edge on a regular basis.

So when I saw the final tweaking going on yesterday morning and sensed the frustration in the room I said – in a rather loud voice – something like:

“Sometimes it’s best to just STOP and LEAVE THINGS ALONE.”  And then there was silence.  I hope it helped.  I know I felt better getting that off my chest.

The event went very well.  I was impressed with everyone’s presentations and how we got started on time – and finished up early.  That is the perfect gift to your guests in my opinion…especially on a Friday afternoon.

Now, about that conversation in front of the campus fountain.  I’m still confused but I’m OK where things left off.  This won’t be the end of head butting, but I guess in the bigger picture it’s just a part of being, well, a part of this team.  I suppose I could have said earlier on I was getting frustrated and overwhelmed, but when we were past due on things that needed to happen quickly I chose to just suck it up and DO rather than bitch.  The bitching came later – and the random balloon request was the straw on the camel’s back.

It’s confusing when someone tells me it’s OK to say no to them occasionally…but then in the same breath tells me how upset they were when I said NO to balloon research.  Only certain no’s are OK to push back on then?  HUH?  I chalk it up to people being tired and overworked.  And human.  So, I try to inject a little of my trademark grace and forgive.  But I’m not ready to forget.  We’ll get to the bottom of all of this and come to a new agreement and understanding.

Oh, and yes there were balloons in the conference room.  And they looked great.