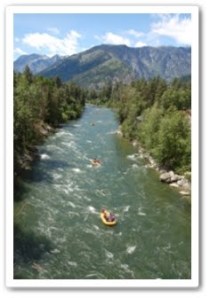 Then at another turn in the river we spotted a woman on the banks by herself yelling at us about “jackets!!”  Some sort of jackets!  What??  Did she need help?  Was she hurt or did she need AAA?  We yelled back at her that we had NO idea what she was trying to say.  Finally the dry-witted guy in our group said “…OK…and YOU have a nice day.”  We all roared laughing.  Then our guide explained that she was explaining how the rafting company sells splashjackets – and that she works for the rafting company itself.  Oops!  Here we were ripping on her like she was looney-tunes and turns out we were wrong.  But what were we supposed to do…just shout our orders and Visa numbers from the river?  Too hilarious.

By this time the rain had let up for awhile but it was still a tad overcast.  One of the guys up in the bow looked back at me and joked, “Wow, it’s a good thing you brought sunglasses.”  Dripping in sarcasm, of course.  At this point I was just glad they were still up on my head.  I’d made a point to leave the nice watch and rings at home but did bring a pair of my favorite sunglasses, knowing there was a teeny risk they’d end up at the bottom of the river.  Even through the roughest rapids, they stayed on top of the ol’ head here.  Whew!
At one point we had to pull over onto the shore, pick up our rafts and walk for about 10 minutes on a mud trail to meet up again with the river further downstream.   Turns out this was to avoid having to go over the 8′ drop of Dryden Dam, which I suppose was a good thing, ha ha.  We even saw a few crudely-painted wooden signs on the river that said “move right.”  And one of the guys exclaimed, “HEY!  Movie night!!”  And we all cracked up.  Maybe he needs his eyes checked?  And maybe he shouldn’t have been one of our leads up front?  We were dying laughing.
As we were hauling the raft over land (called “portage” as I learned), I declared outloud:  “OK, this is the Lewis and Clark portion of our trip.”  And everyone laughed again.  That’s how it was this entire afternoon – nothing but water, laughs and an occasional sunbreak!

There were 7 or 8 rafts total in our group – turns out a few people out of the original group of 100 or so did opt out due to the thunder and lightning.  Our raft was one of the last ones to launch, so we had a funny view downstream of a couple of other rafts in our group who were well-equipped with water soaker guns and we laughed as they kept blasting eachother nonstop the entire time.  Ahhh, everyone loves a water-logged Gaza Strip!

The last set of rapids was the most intense and we screamed and whooped the entire time.  Our guide would give us the command to row “forward!”.  But there were times we were tilted over so much I had nothing to row but air for a few split seconds!  Too funny!
Afterwards we met up in Riverside Park again to be welcomed by a fabulous steak barbecue with the whole works – corn on the cob, rolls, potato salad and lemonade.  But before all this, J and I and a few others REALLY wanted to change out of our wet clothes.  The funny part was was that we were about 20 miles away from the hotel where we were going to be staying and hadn’t checked in yet.  What to do?
Turns out there was a community clubhouse not far from where we were parked with restrooms inside, but the restroom was packed full of a bunch of girls in evening gowns getting ready for a Sweet 16 party.  Oops!  Where else could we change?  We did it one at a time and old school, wrapping in polar fleece blankets hidden between the car and some large trees.  One changed while the other stood guard.  Hilarious!  But so worth it to get into dry clothes.
After the barbecue we headed further east into Wenatchee to get checked into the hotel, unpack and get some well-deserved showers.  Turns out the fiance’s brother of my friend’s co-worker (how’s that for Six Degrees) was the GM of the hotel where we were staying and not only picked us all up to take us out for pizza and beers but also made sure we had the lowest rate possible on our rooms.  Love that!
So we had a few more laughs recapping the day at McGlinns in Wenatchee; well worth a stop if you are ever out that way.  Good food and nice people.
I was so glad we had decided to stay overnight in town rather than drive back 3 hours over the mountains so tired and drained.  J and I grabbed breakfast in the morning and had a wonderful drive back, complete with a surprise fog cover over Stevens Pass – so thick we barely knew when we’d gone over the summit!
What an amazing 24 hours….it felt wonderful getting out of town after pretty much feeling like a homebody the past year or so.