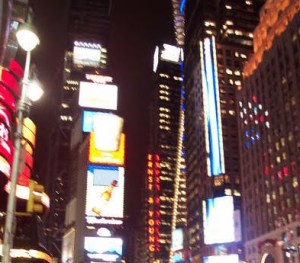 I consider myself an amateur-ish world traveler. Although I haven’t been out of the country for nearly 10 years since my last trip to the Caribbean, I’ve logged a few interesting places in my lifetime. The beaches of Trinidad, the bustling markets of Budapest, delightful sidewalk cafes in Ljubljana (Slovenia), a week in a Tokyo suburb with time for bike commuting, the sensuality and awe of Venice and the bright sun and abacus-wielding merchants in Uzbekistan to name a few.

What was late to cross off the list? New York City. How in the hell did I not visit NYC until 2004? Not even once on a flight stopover! The closest I came was the spring of 2000 when a friend and I caught a redeye to Newark on the way to Ft. Lauderdale for a cruise. I still remember being all bleary-eyed from that cross country flight (I have yet to discover how to sleep soundly on planes) but I vividly remember walking through the terminal and witnessing the glow of the early morning sky, the River and the silhouettes of the Twin Towers. [After watching the horror of 9/11/2001 live on TV as so many of us did, I closed my eyes and remembered that serene sunrise].

The company I used to work for had a long-standing relationship with our client and we were constantly looking for ways to rejuvenate and revitalize our service offerings and how we were going about our day-to-day business with them. Among other things, we decided to really step it up and conduct one of our usual business reviews by hosting it at our US corporation headquarters in Midtown Manhattan (a building on East 53rd ST to be exact).

So, in the Spring of 2004 we jetted off to NYC for a short stint, about 10 of us total. We lucked out with gorgeous sunny weather – perfect for walking and exploring. I was absolutely giddy and oozing excitement. Man-hat-tan….what some call the Center of the Universe! People come from all over the world to find or re-invent themselves, to find success, love…everything one could possibly want and more can be found here!

I knew theoretically that space was a premium, but got a huge taste of it when first stepping into my hotel room. My God, when I opened my suitcase on the floor (I had no other choice except for the bed), I couldn’t walk around my bedroom/living area!

We were pumped full of adrenaline when we arrived, so we put on our walking shoes and headed up to Central Park. If you haven’t yet walked through Central Park, add this to your Bucket List, for there is nothing else quite like it. We took pictures, admired the scenery, and gawked at the to-die-for apartments overlooking the Park (how many millions and millions for a view like that, we wondered?).

After dinner at an incredible steakhouse (the name of which escapes me now unfortunately), we asked our server for a tip on where to grab a drink nearby. Heck, we were still on Pacific coast time and not quite ready to turn in yet (not that any locals were either!).

His recommendation? P. J. Clarke’s: 915 Third Avenue at 55th Street. OK! This is a 125 year old pub/institution of sorts, where Frank Sinatra supposedly “owned” his own table, Buddy Holly proposed to his wife – oh, and Nat King Cole proclaimed it serves up the “Cadillac of cheeseburgers”. A heavy hitter hot spot for decades.

I am not shy, so walking into a bar, grabbing a drink and making random chit chat with people is kind of like breathing to me, but boy did I feel out of place once we walked in. P. J. Clarke’s was awash in a sea of dark clothing – midtown Manhattan uniform! Here I was still in my traveling clothes – khaki pants, walking shoes, lightweight striped sweater and a dark denim jean jacket. Yikes, I probably looked like I’d just gotten off work at the Gap or something, ha! M and I got our drinks, headed to the jukebox to pick out a few cool Sinatra tunes and then started mingling.

We were approached by two gentlemen in de rigueur dark suits. They immediately asked if we were “with those two guys,” meaning our two (male) co-workers who were now at some other part of the bar. M and I laughed and said yes we are and that they are co-workers. We continued to chat with them and then realized after awhile they were getting a little bit annoyed that we didn’t know who they were!

Turns out one was a local TV news anchor and another was some sort of local film critic. Too funny…how are a couple of girls from the other side of the country supposed to know this?

And then Dr. Ruth walked into the bar. I know it sounds like a punchline but it could not be truer than true! She immediately recognized the two guys M and I were speaking with and greeted them. Boy I wish I’d had a question ready to ask her! And for the record, she looks exactly the same in person as she does on TV.

Yes, my friends, this was my first night in NYC. Did we actually get any work done on this trip? We sure did, and our client was very impressed with our presentations. But it’s the funny side stuff that is far more interesting: wandering the streets looking for something that is “just a few more blocks away,” a screaming match with a local getting a cab during rush hour, a sudden downpour one night in Times Square (hence the blurry photo) or hanging on for dear life with a crazy cab driver from Bangladesh whom we told, “just take us to the Village.”
We even got kicked out of a corner area of our hotel lounge one night because the server told us, “someone has a reservation here.” Keep in mind it was 1:00am on a Wednesday. Who has midweek reservations at 1:00am in a hotel lounge? Sure enough, a P. Diddy lookalike showed up with two supermodel-ish women and took over our spot.
I guarantee that would never happen in my hometown.